It’s interesting when current events lend themselves to changes in our linguistic lexicon. One COVID-19 phrase-du-jour addresses the rapid adaptation that savvy business owners demonstrated at the onset of the pandemic.

Not since the infamous scene with Rachel, Chandler and Ross on the hit TV series “Friends,” has this word made its way so frequently into our vernacular. The scene is the three friends trying to maneuver an uncooperative couch up a windy stairwell. All the while with Ross and his nasally whine yelling “PIVOT…PIVOT”.

Yes, businesses have had to pivot as never before. Like amazing basketball players eluding the outstretched hands of the defender, these businesses had to adapt at lightning speed.

It was interesting to observe the different reactions across the area. Some people remained flat-footed, almost frozen. Others chose to mobilize and adapt to the new environment. A good friend of mine, Tim Cole is the director of Waypoint Church Partners. He and his group help launch and grow churches in the mid-Atlantic region. When talking about the 50 churches they work with Cole had an interesting analogy. “It’s like when Jeff Gordon of NASCAR came along, and they asked him what made his driving different. Gordon used to say that when there was a wreck most people’s inclination was to slow down. His attitude was different. When there was a wreck Gordon stepped on the gas. It was the same with our church leaders. Pastors that kept their foot on the gas are doing better and reaching more people than before COVID-19. The ones who pumped the brakes are having a much more difficult time.”

We have seen the same thing with businesses in the area. Today, I wanted to highlight some of the Pivoting Powerhouses we observed. For transparency, the businesses we highlight are NOT clients of Silent Partner Media.

At first it may not be all that obvious. People will still need T-Shirts and Novelty items right? If that is your thinking you would be mistaken. Goochland Tees Facebook post from March 18th, 2020 says it all:

“One of your biggest seasons looks to be postponed or cancelled. How do you prepare the retail for baseball [T-shirts] when there is none? Events and camps, canceled across the board. This will test us no doubt. But know that we are strong and will weather the storm. God bless everyone and stay safe.”

Scrolling through Goochland Tees Facebook page @goochlandtees reads like a diary of events. It leads up to and through a significant pivot.

Through March when there was hope this would be a couple weeks to a month you see posts that reflect hope. They let folks know they were open. They thanked them for their support, and they put stuff on sale to make it attractive for folks to come in.

In the last week or so of March, Goochland Tees Inc. did what you would expect. They came up with good, relevant items for these times.

They also did what a lot of great business owners did. They focused on projects they had been intending to do and made the most of the “down time,” keeping their foot on the gas.

Then the Pivot!! What are T Shirt makers good at? Working with material. What material would people be needing for much longer than any of us would have imagined? Masks.

And they have been rolling ever since:

Not only did Goochland Tees pivot with their product offerings. They also did a major pivot to their marketing strategy. They saw the need to let the public know what was going on. From the very beginning they used social media to get their word out. Prior to March 18th they were averaging 1 post every 2.5 weeks. Since March 18th they have flipped that and are averaging 2.5 posts every week!!  And as if they knew we were highlighting them. Which I can assure you they don’t, they launched their first paid Facebook ad campaign last week!

Another local business that stood out as a “Pivoting Powerhouse” is EZ Ship of Goochland. Early in the quarantine I stopped in with another local business owner for notary services.  The owner, Straford Slater, told us how he and his team were making signs for local restaurants and offered to make some for our client’s restaurant. I thought to myself… “this is what community is about.” That put EZ Ship on our radar as one to watch.

EZ Ship’s Pivot came early and in the form of Business to Business (B2B) support. Their first post during COVID-19 on March 22nd says it all.

“Yesterday at about 2:15pm (after we closed) the Landlord of Town & Country Shops called and asked if he could get 6 signs to put up around the area to let the public know that one of the restaurants in his shopping center was still open and serving takeout.

My wife Heather and my Daughter Savannah went to the shop and worked up the artwork, printed, and assembled the signs finishing up about 10:00pm.

We hope that you will consider helping the folks at Eccoti if you are in need of ordering some meals for take-out during this time of isolation.”

The easing of local sign ordinances by Goochland County Administration offered EZ Ship greater opportunity to create more signs to let people know our businesses were open to serve. The Pivot didn’t just swing to signs. They mobilized to support the business community.

As this is being written Goochland High School Graduates will convene tonight at Goochland Drive-In Theater.  They will participate the most unique graduation ceremony in school history. Unconventional times call for unconventional methods. EZ Ship began offering yard signs to give shout outs to the graduates who had the second half of their senior year stolen from them by a virus.

As you travel through the county you can see these yard signs and give a wave or toot of your horn to our newest Goochland alumni.

As an advertising agency we would be remiss if we didn’t mention EZ Ship’s marketing efforts. In our opinion EZ Ship has always employed a strong social media strategy. While they have stepped up their posts a bit, to EZ Ship’s credit their social media efforts were already strong. While other businesses had to tackle COVID-19 and often a social media learning curve, EZ Ship already had that box checked and was able to focus on helping other businesses in the community.

A common practice for new businesses, especially restaurants, is to launch with what’s known as a “soft opening.” You open without a lot of fanfare, often to friends and family first. This allows you to work out some of the kinks before the masses test the limits of your systems. For Evan and Phillipe and their families, their new restaurant would have to endure the softest opening on record.

Silent Partner Media chooses to highlight Los Panchos because of their resolve and determination to make their new restaurant a success. Los Panchos realized that to make this work they would have to do something no one in the area has been able to do. They would offer delivery. If you’re reading this in a suburban area this may not seem like a big deal. If you are familiar with the location in Goochland, you understand this decision presented its share of challenges not the least of which was the breadth of the service area needed to ensure enough households to serve. But Los Panchos rose to and is meeting that challenge.

It is often the case that execution fails to meet intent. We have ordered staff lunches on two occasions. We are 5.4 miles an 8-minute drive according to Google Maps. Both times the orders not only arrived in less than 30 minutes, but it was before the time they quoted. All the orders were correct, and the food was hot! Execution definitely met intent.

Los Panchos also seized opportunities when presented. When the county allowed temporary signs, Los Panchos jumped on the opportunity. By way of signage they let people in their delivery area know they were there to serve. As Virginia moved to Phase 2 Covid-19 reopening, Los Panchos was ready with a tent and outdoor seating.

In times like these, when entrepreneurial blood runs through a person’s veins we see the difference in those that hit the gas instead of pumping the brakes. It’s that spirit of “Can Do” that makes our country great. We would not wish these times and situations to ever come again. Seeing businesses like these give us hope that we will recover and come back stronger. Our hats go off to all the business owners making difficult pivots and producing valuable products and services! Straford Slater of EZ Ship said it best in his April 10th Facebook post. “Just because we are a Shipping Store doesn’t mean we can’t think outside the box.” Well said Straford, well said indeed. 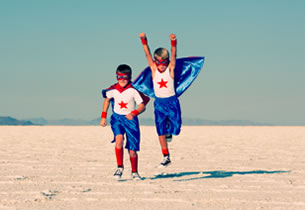 “Brennan has written and developed a series of very professional radio ads for BREMAC. She has taken a new trademark and fully developed an effective ad campaign around it. I have found her to be both a creative and dependable resource, two adjectives not often associated with each other. She’s a great resource and tool to have on board. A+”